Been busy juggling several projects at the same time for the last year or so. Overwhelmed, nearly. So, this post is pretty much to see if i can figure out how to wrap my head around the revamped wordpress interface.

The pictures are from Buenos Aires, Argentina. Specifically, the city-within-a-city that is La Boca, one of the prettiest and most brightly colored urban spaces to be seen anywhere in the world. Where better to take photographs in monochrome?

The captions refer to the pic above them. 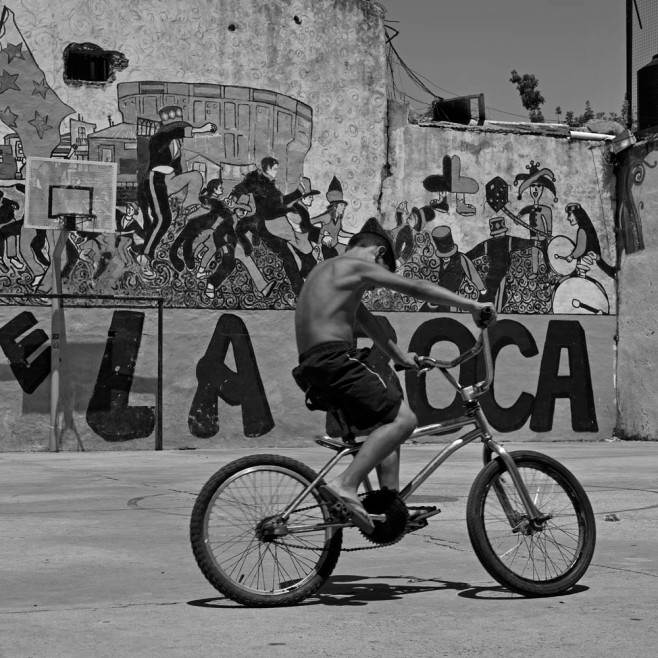 You always know it, when you’re in La Boca. 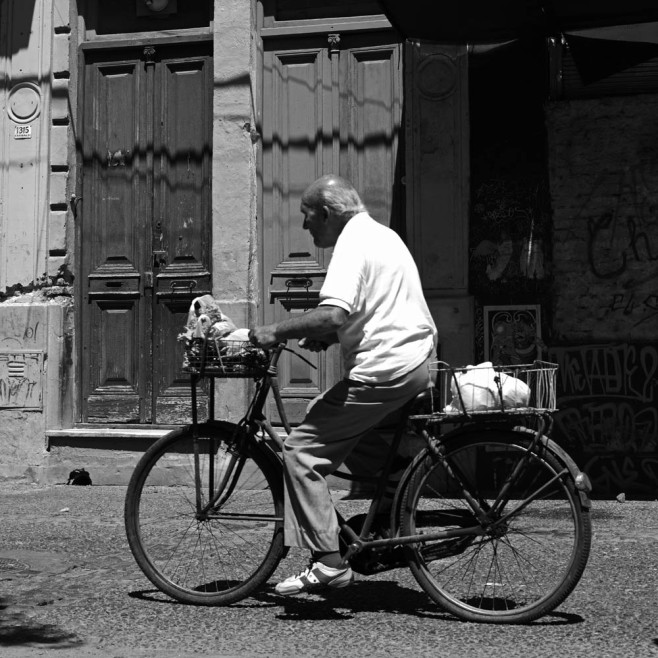 All things get done at a more relaxed pace here.

The large iron grills are to keep pedestians off the train tracks.

The Italian presence is particularly self-evident, in gritty but charming La Boca.

All photographs taken february 2016 with a full-frame dslr.

My name is Giacomo Ciapanna. I was born into a large sharecropper family in the late 1800s. Sharecroppers grow crops and raise livestock but don’t own them or the land they live on, so we were very poor. I also suffered ill health. So bad was my breathing in fact, that i could not  work the fields like my many siblings. So i went to school, barefoot from our fields in Martinsicuro way up the hill to Colonnella, the town from which the family name Ciapanna came originally.

I was expected to die young, but the gods had different plans. In my late teens, all hell broke out in the form of the Great War. I was drafted into the army and handed a bayonet – a large rifle with a knife in the front end – that weighed nearly as much as my skinny, frail body. What i was not given was something to load the thing with; no powder, no lead shot, nothing. The mission was to charge up the icy mountain and stab the enemy as he charged at you. Which he didn’t, becaue the Austrians in that nick of the Veneto region did have arms. And they showered us with all manner of projectiles. An explosive one went off not far from where i stood shivering, wide-eyed and gasping for breath.

It took one of my eyes and most of my hearing with it. But it did get me sent home alive. Determined more than ever, i went on to university in Bologna, where i graduated in the early 1920s. That was before penicillin had been discovered, so needless to say, things were quite different in the medical profession. I got top grades and opened a dentistry studio next to my house, on Via Ugo Bassi in San Benedetto del Tronto. This is just a short distance away from Martinsicuro, but it is across the Tronto river, which separated the Pontiff State from the Kingdom of Naples until Italy was unified, shortly before my birth. So there are many differences, especially in the local dialects, that will persist perhaps for ever.

I am a huge lover of photography. A passion which i’m proud to have handed down to my son Cesco and, through him, to my grandson Alessandro. I shoot the world around me. I am especially fond of flowers and i love to hang around the beach when the fishermen are all abuzz with their daily toils. Of all the things i have left behind when i eventually died, aged nearly eighty and in the comfort of my home, there is one which i was particularly fond of. It is a large leather-bound album with some of the prints from my forays on the beach. The pictures that follow were taken during the 1930s at San Benedetto del Tronto.

Contrary to today, the sails were brightly colored, and often painted with decorations. 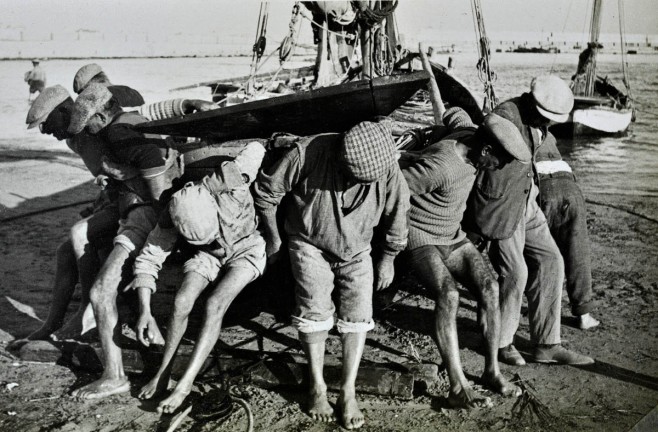 All together now. The hard part isn’t catching the fish: it’s moving the boat in and out of the water.

Much pushing, plenty of pulling…

Say buddy, any idea how much longer ’til they invent the winch?

Thankfully, there is always a bystander ready to lend a helping hand… 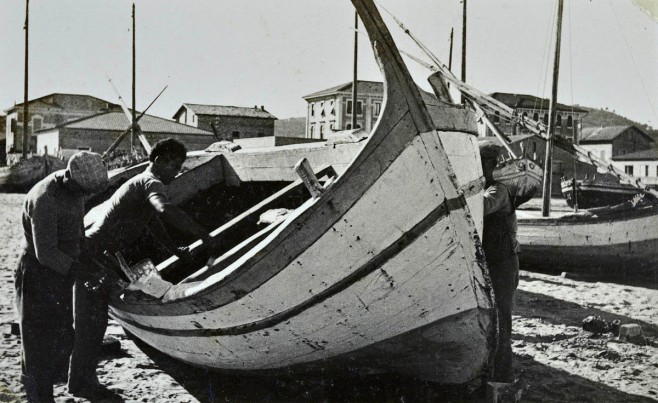 Elegant, graceful lines, as are those of the buildings and the gently rolling hills behind San Benedetto. 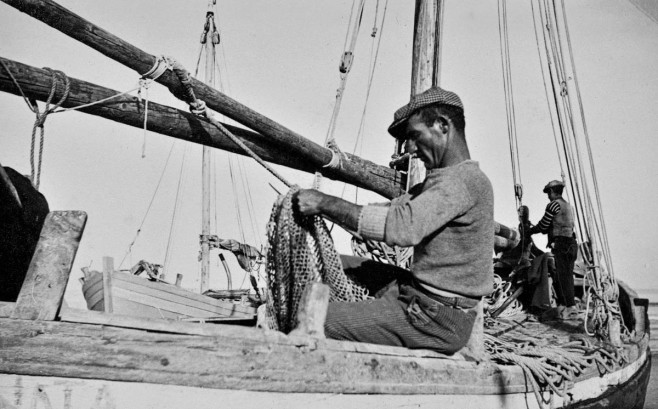 Back in the day no well-to-do gentleman would even consider leaving home without his hat. 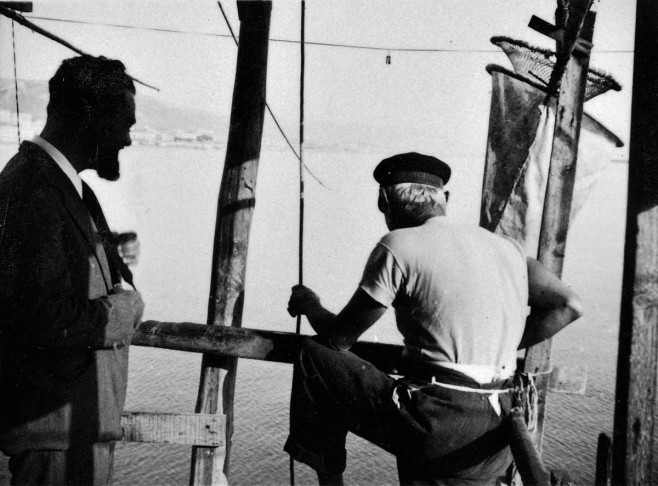 This one is quite incredible, especially considering that it is the photographic reproduction of a tiny contact-print (24x36mm). 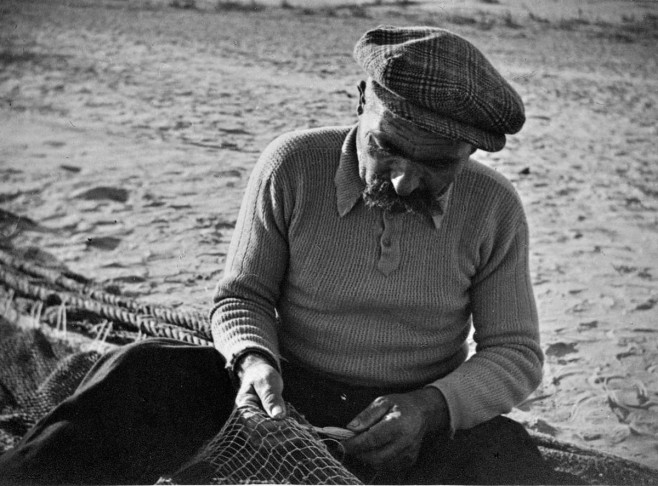 Mending net. The moustache hints that this may be the same gentleman as the one in the photo with the child. 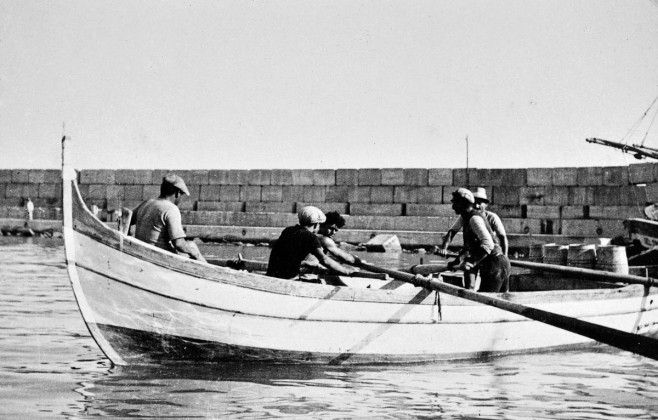 A system that worked fine in the 1930s, and still works fine today. 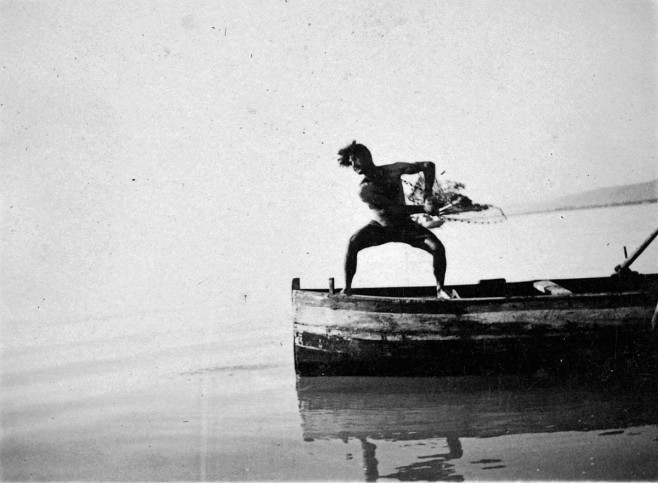 Copied from a 24x36mm original,. this is one of the most striking photogaphs in the series.

My name is Alessandro Ciapanna. I was born in San Benedetto del Tronto, in the Ascoli Piceno province of Italy’s Marche region. When my father Cesco (or, more familiarly Ceschino) passed away in early 2014, of the things he left behind there is one i am particularly fond of. It is the same leather-bound album of photographic prints my grandfather lovingly assebled and then carefully guarded. The binding is now in tatters, but the content is surprisingly well preserved.

Not only am I amazed by the content of the photographs themselves. I am especially thrilled that my grandfather, through the simple use of a camera, has been able to communicate directly to me. That he can speak to me of his world, of what he considered important, beautiful, interesting. That he can tell me stories of rituals that had remained unchanged from time immemorable, which have since then all but ceased to exist, thanks above all to the motor revolution of the mid 1900s.

Having received such a blessing, I felt compelled to share these images with the wider world. I have dutifully tagged each image so, once out there, they should be easily searchable and findable. And, hopefully, enjoyable. For this particular set of images, i would appreciate any support in helping them get all the views i believe they fully deserve.

On the techincal side, i have reproduced these prints with a dslr fitted with a manual-focus 55mm macro lens. I have done no retouching save adjusting the contrasts to combat the yellowing on some of the prints. I am sure that well retouched, they could easily be blown up for a public exhibition.

Grazie, Nonno! And thank you, dear viewer, for the visit,

Ok – new camera. Second hand, but like new. Fixed focal length 50mm lens. And one city-sized playground to try it all out. 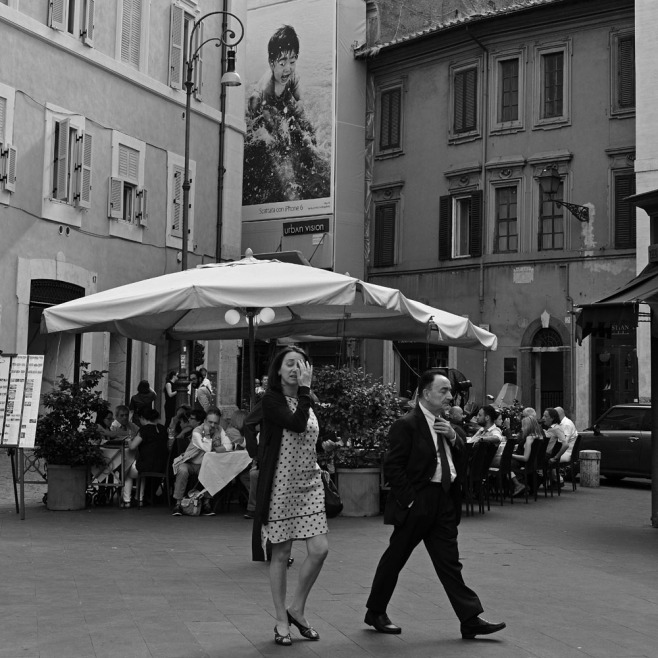 So i point the camera in a Roman piazza. Just to kind of see if it really is as sharp as they say. And then i zoom in on the people in the background. Yes, it really is quite sharp: one disgruntled gentleman at the bar table is easy to recognize: Rino Barillari, the once-famous paparazzo… 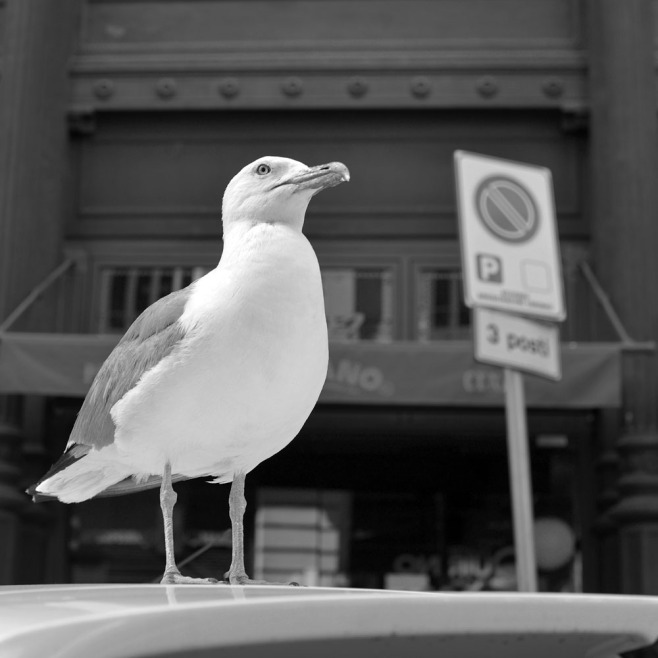 They are big, they are beautiful, and they are increasingly bold. This seagull allowed me within maybe 50 centimeters without flinching.

It’s not completely legal, but it is also absolutely irresistible, especially when the rest of the city is torching under a relentless summer sun.

A priest, a nun and an elegant tattooed lady: welcome to Rome, 2015.

Antique shop. The statue represents a Stones fan about to process a Beatles record…

Have i mentioned how pleased i am with my new camera? This was taken at full aperture (f/1.4) at 1600 iso. Image quality? Impeccable.

So, as you see, some things never really change in Rome. But with a new camera, it’s great fun to take on old subjects anew. Thanks for the visit.