Hello after a very long time! A few more photographs from the ghats at Varanasi, India, as captured by a mechanical, manual-focus 35mm film camera with a standard 50mm fixed-focal length lens.

It’s the crack of dawn on the banks of the Ganges, but the boats are already bobbing into action along the ghats at Varanasi. As they have for thousands of years.

This one boat is taking a little time off near the massive iron railway bridge. Not really sleeping, just sort of rusting a little… 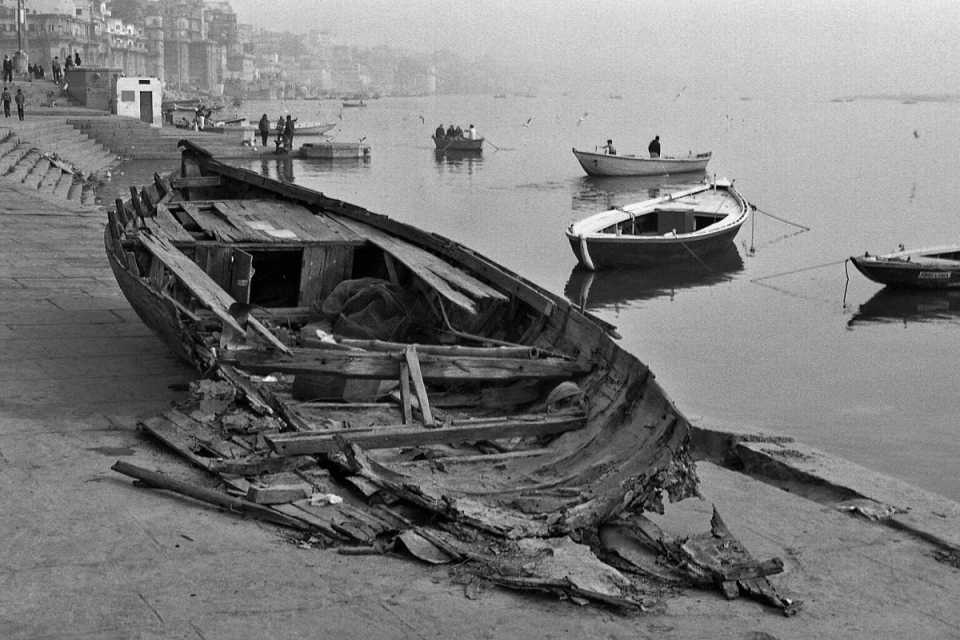 This one, on the other hand, will never snap out of the coma. After many many years of hard work, it is gradually melting back into the nothingness of time.

And this is what the wooden boats look like at their inception. Built up one piece at a time from and with nearly nothing, within weeks the completed boat will be ready to sail. (Note the bad chemical stains from the cheap lab that developed the film…)

Boat building not only provides work for several skilled craftsmen, but also gives casual onlookers a comfortable bench and young fathers an interesting playground for the kids to clamber around.

All in all, the boats at Varanasi are born and then die and decay only to be born again. Mostly, though, they work. As do the people, some of whom sleep in them. And when it’s morning, the day starts as anywhere else: with a shave, a shower and a good tooth brushing. After all, one of the better things about boats is that they all come with running water…

Photos taken early 2014 on color-negative film then scanned and converted to monochrome via software. Some of the pictures – one of which is included in this set – are ruined by bad chemical markings left from the photo lab and impossible to remove except, perhaps, by washing and drying the negatives again. Which seems a bit too much of a hassle for pictures that are not exceptional. Not exceptional, but – i hope – decent enough to display.

Thanks for visiting. I hope you enjoyed.