An image search for Gibraltar might leave you with the impression that this independent nation of thirty-thousand people has little more to offer than apes and rocks. In fact, not only Gibraltar in a strategically important location, but some parts of it are actually quite charming. Especially when the strong Mediterranean sunlight manages to slip through the narrow alleys.

This blog post shows a little of what Gibraltar looks like today through a glimpse of the streets, the shops, the people. The entire photo essay is over 150 images, taken at the end of August. 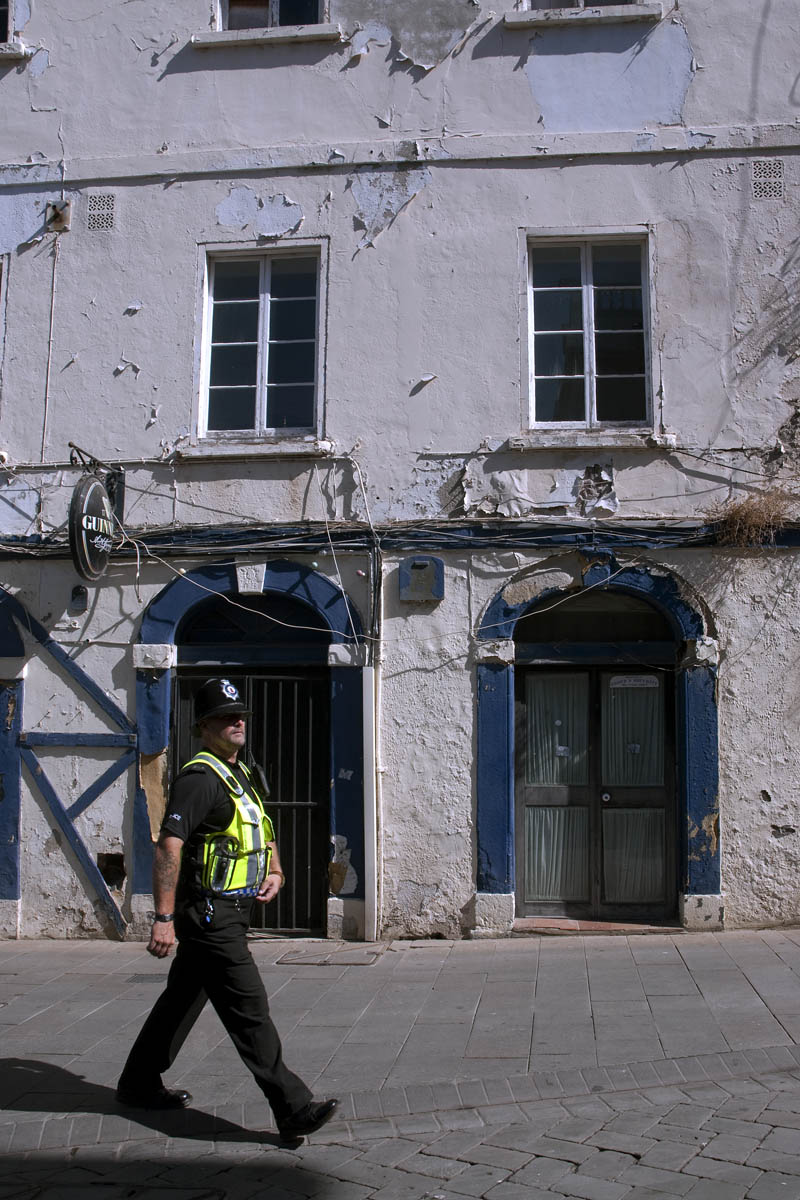 A tattooed bobby in full uniform patrols the streets – alone and unarmed – walking past an abandoned and crumbling building with cracking paint and weeds growing out of the walls. A fading, dusty Guinness sign indicates that the ground floor once housed a pub. 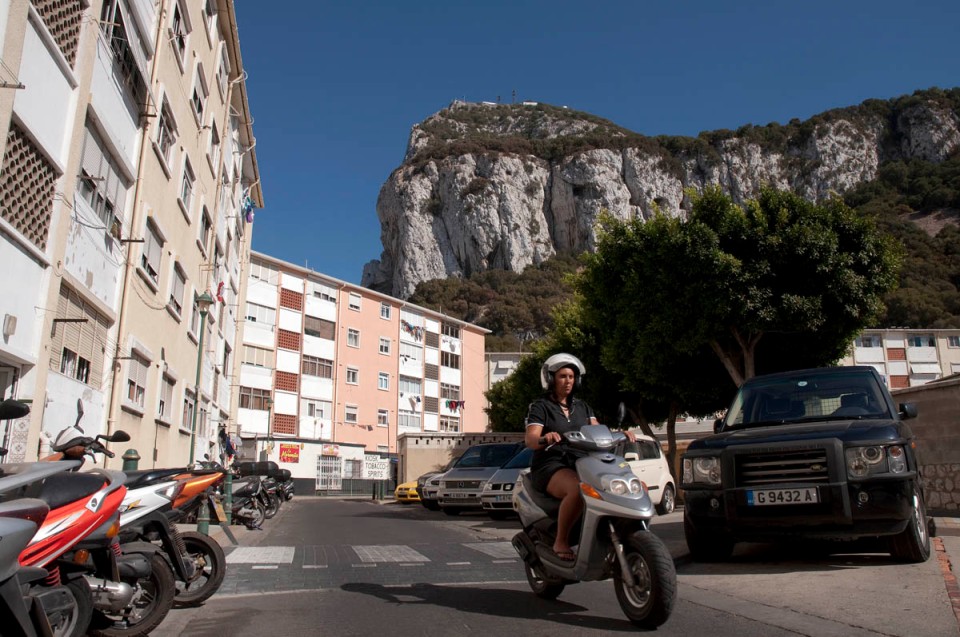 A helmeted girl rides her motor scooter past some housing units built in simple, Andalusian style, with light-colored, ventilated walls and miles of clotheslines for drying laundry. In the background, the Rock of Gibraltar rises straight up to over 400 meters. 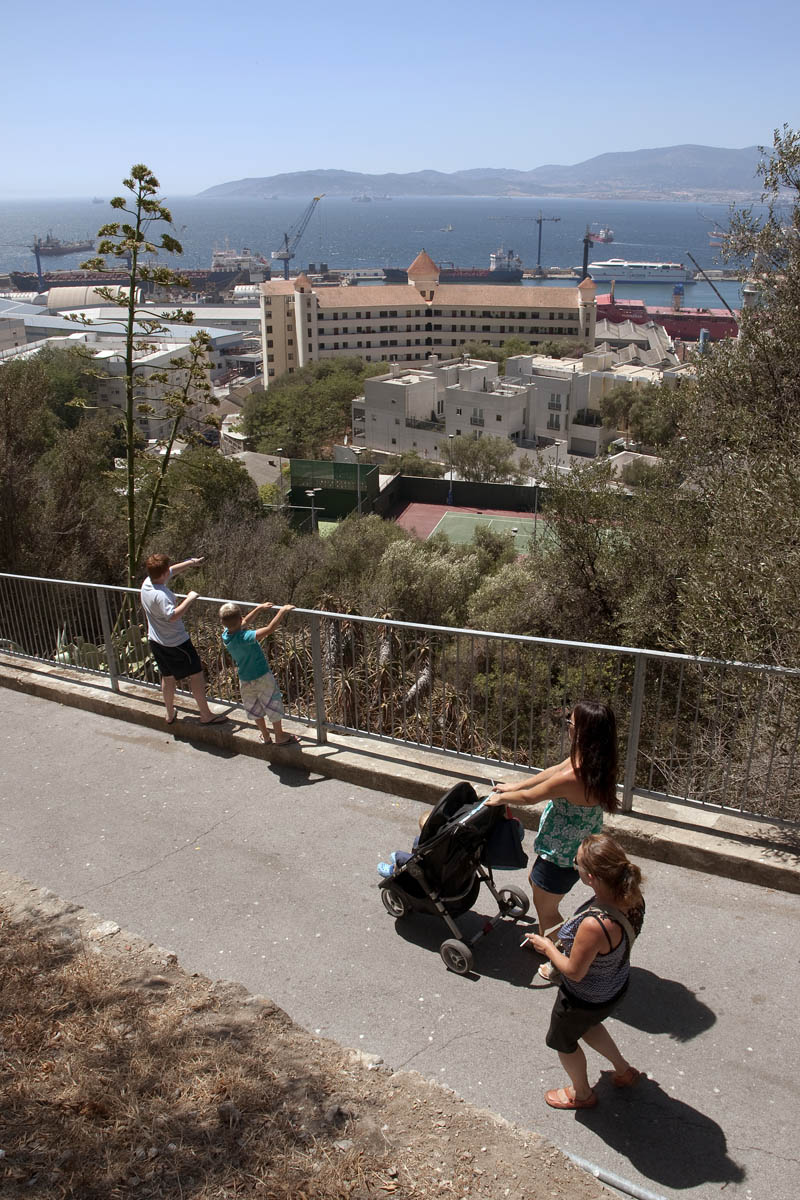 Two ladies push a stroller down a road overlooking the city and the bay beyond as one of two children points out one of the ships in the harbor, part of Gibraltar’s well-developed merchant marine.

Two men talk near parked motor-scooters. Beyond them, a child sits on a roof among old-fashioned television antennas, several of Gibraltar’s housing units, and a clear view over the bay, past the ships at anchor and all the way to the cranes in the harbor of Algeciras, in Spain. 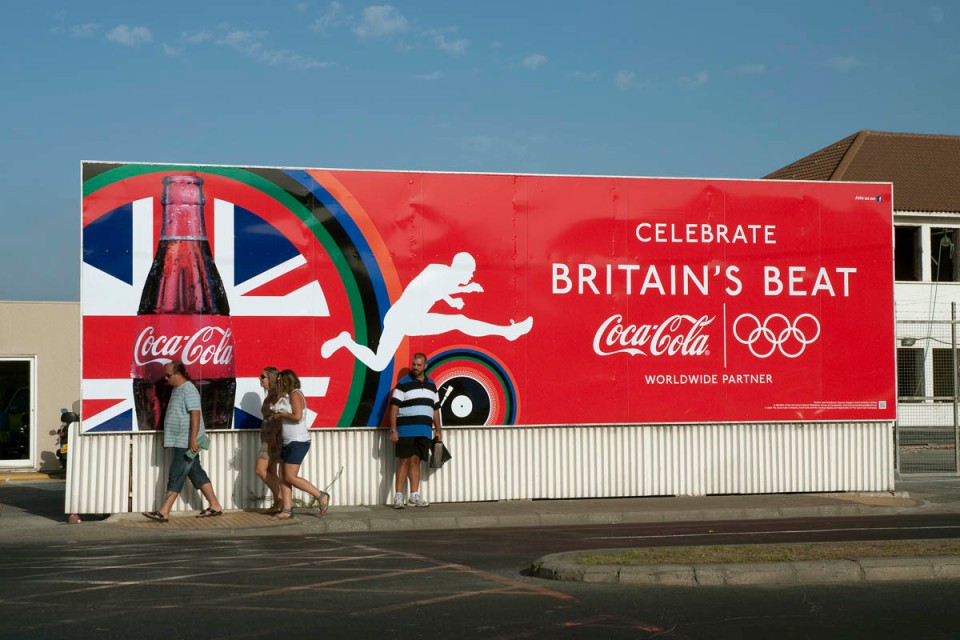 A stylized figure in a large advertising billboard – celebrating the British efforts at the 2012 summer Olympic Games – appears to be neatly leaping over a man’s head, as he stands on a sidewalk observing passers-by. 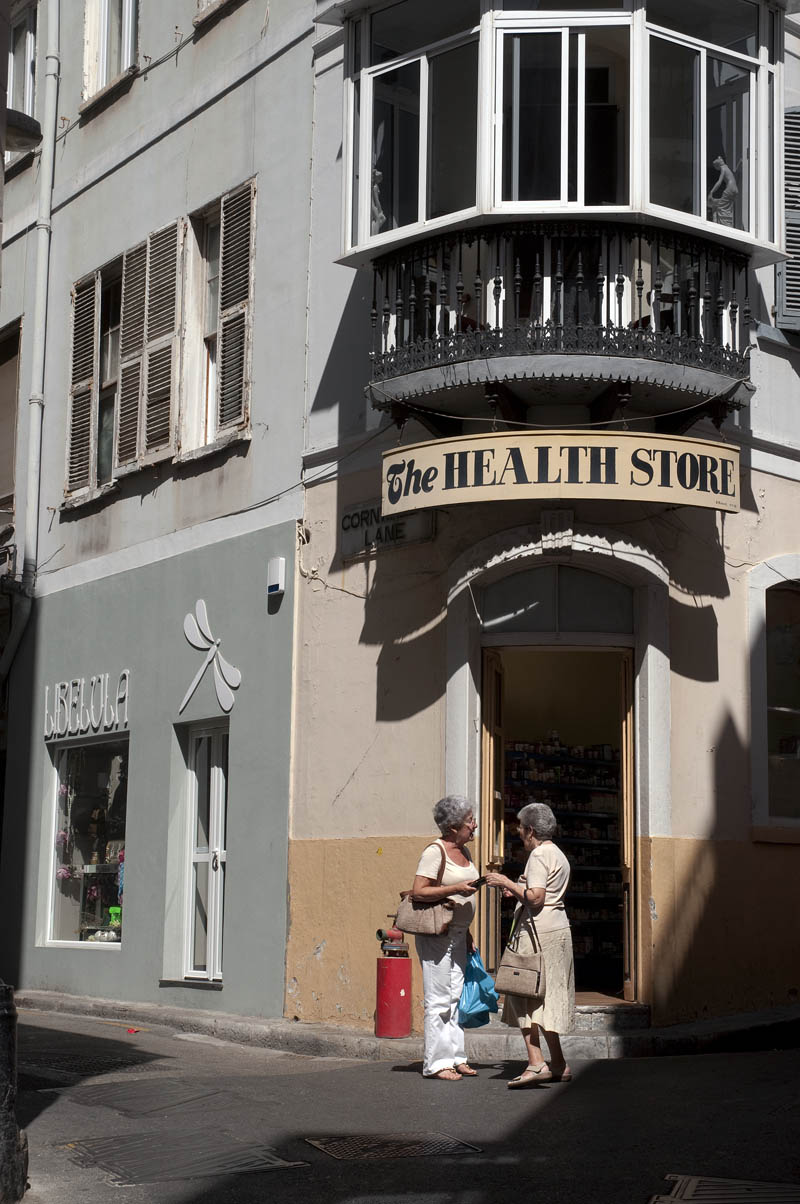 Two local ladies meet and greet in a shank of sunlight in front of a shop on a street corner along one of the many lanes that run sideways from Gibraltar’s Main Street.

A man in a light blue shirt walks in the patchy light of a tree’s shade carrying a small yellow package. In the background, the harsh sun projects the twisted shadow of a lamppost – complete with flower pots – on the unusually-shaped wall. 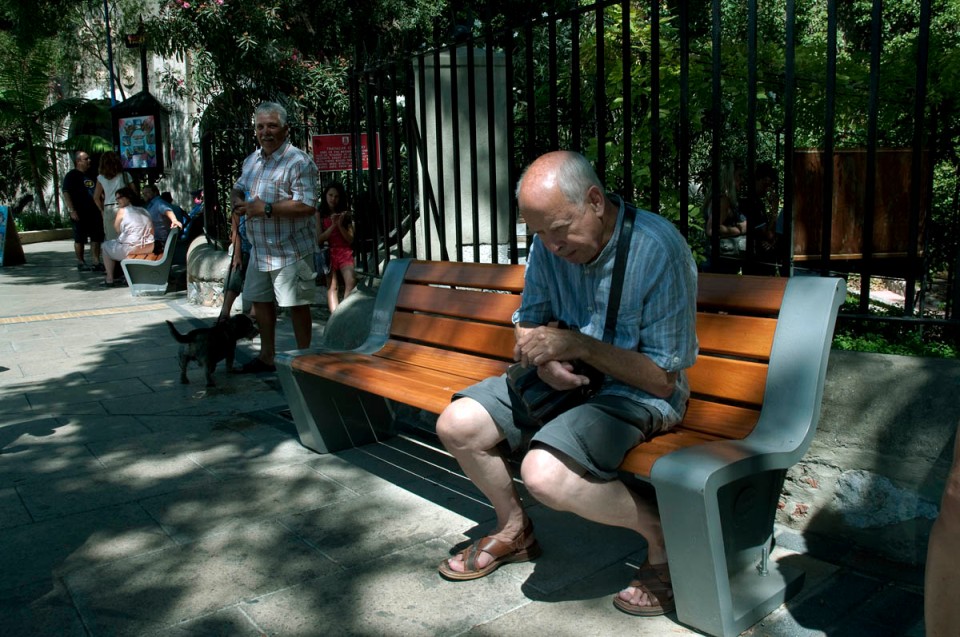 A gentleman sits on a bench in patchy light near the entrance to Gibraltar’s Trafalgar Cemetery, which houses some of the remains of those who died from the wounds received in Admiral Nelson’s famous battle of 1805.

A slim girl appears in silhouette against a white rectangular wall as she walks in the contrasty light down one of Gibraltar’s many narrow alleys. In the background, jumbles of cables and pipes, a clock tower and a satellite dish. 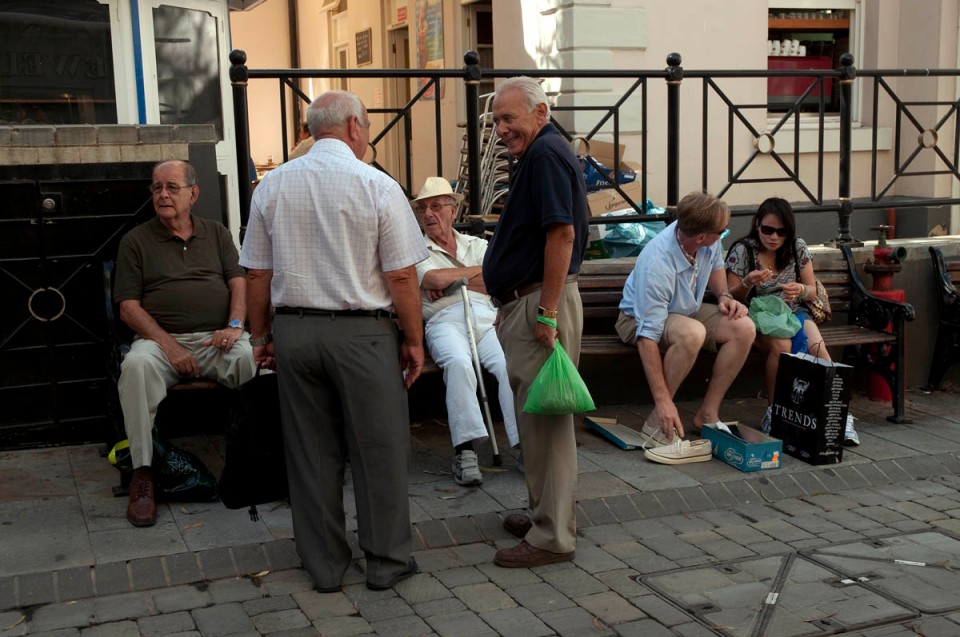 Local gentlemen sit on and stand around a bench chatting in Gibraltar’s city center while, next to them, a tourist changes into a recently-purchased pair of shoes.

Tourists in hats, sunglasses, shorts and sneakers cast shadows on the pavement as they make their way from the cruise ship – a glimpse of which is visible in the background – to Gibraltar’s city center for a day’s shopping and sight-seeing.

A guidebook-wielding man leads his family through the incredibly contrasty lighting in Gibraltar’s Main Street past a white-and-red Wall’s flag. In the background, strings of small white-and-red flags, for the celebration of National Day, in September.

A couple and a man with his children stands in line for the cablecar leading up to the top of the Rock of Gibraltar. The father has a British flag on his t-shirt, while one of his children wears a red baseball cap with the bull symbolizing Spain.

A lady in white dress and red sandals rounds the corner past a window displaying dusty, cut-rate bottles of liquor, one of Gibraltar’s main exports. In the background, a line of small flags for the National Day celebrations hangs across the street. 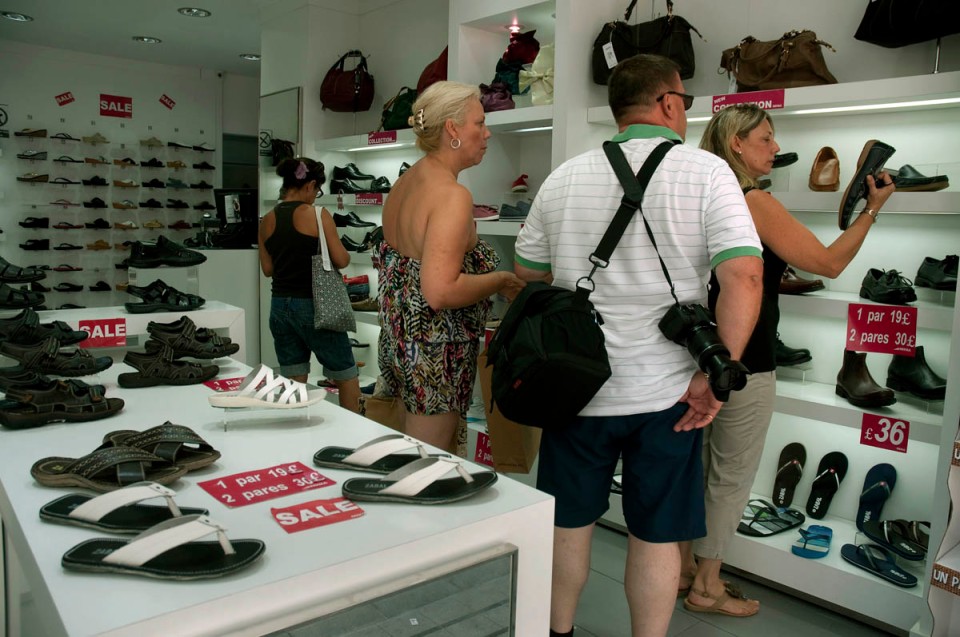 Camera-wielding tourists shop for bargains in one of the many shops along Gibraltar’s Main Street. The signs, as usual, are an eclectic mix of Spanish “1 par, 2 pares” and English “sale”. Prices are expressed in pounds sterling, but euros are accepted s well.

Although most of Gibraltar’s duty-free shops selling tobacco and spirits cater to tourists, the better ones, such as “Bubbles” at 27 Main Street, regularly have several local people standing in line waiting for their turn. 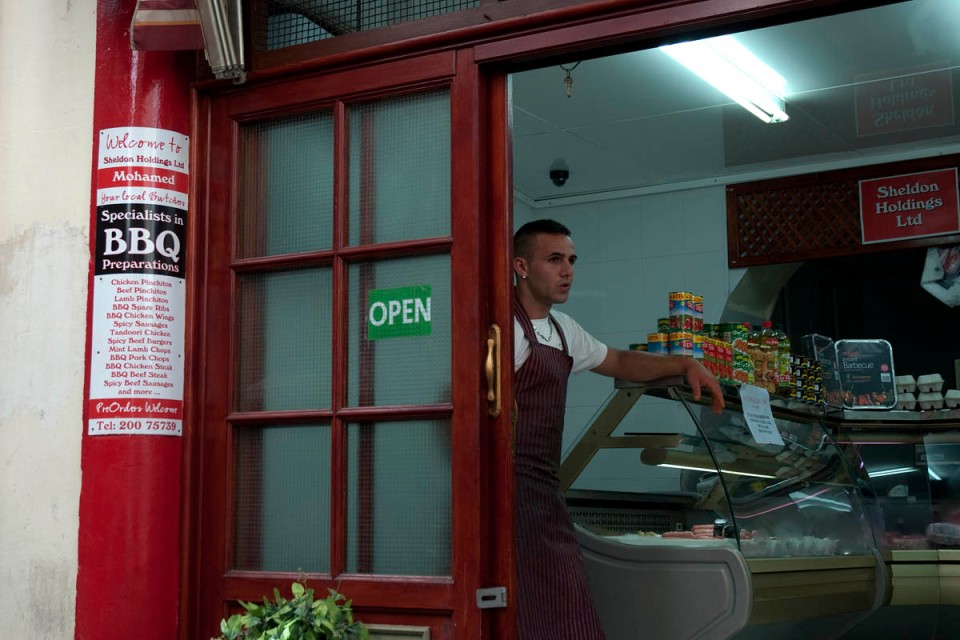 If you live in Gibraltar, your butcher shop might belong to Sheldon Holdings, be manned by a person named Mohamed and be specialized in Anglo-Spanish BBQ preparations such as “chicken pinchitos”.

Some of Gibraltar’s shop interiors pay clear testimony to the many centuries of Moorish domination of this land. The shopowner’s muslim headpiece and the shelves stacked to the ceiling are reminiscent of the shops on the other, southern, side of the Straits of Gibraltar, in North Africa.

Four local teenage girls sit on a city bench playing around with makeup as a bespectacled lady walks briskly past. In the background, lovely pastel-toned walls.

A customer uses the free wifi inside the Three Owls Pub, on the street named Irish Town. Gibraltar’s many pubs are styled almost exactly as those in Britain, and often offer the same beers and ales.

So strategic is Gibraltar’s location at the mouth of the Mediterranean Sea, that its national emblem bears the picture of a fortified castle and a key. Home to thirty thousand people only, this country of a bare 6.5 square kilometers is among the world’s ten smallest. Very low tax rates attract shoppers from nearby Spain and international investment from the world over. Offshore banking, gambling – online and in casinos – and millions of tourists contribute to a very vibrant services economy, raising GDP per capita to within the top twenty in the world, with the average Gibraltarian earning more than a citizen of Austria or Holland. Although it has been British for about three centuries, minor squabbles over jurisdiction still occasionally occur with Spain, with which Gibraltar shares 1.2 km of border.

25 Responses to “GIBRALTAR – bit of Britain south of Spain”